Connect and share knowledge within a single location that is structured and easy to search.

Is it on purpose I can flag unfitting questions only for migration to German.Meta.SE, but no other .SE site?

Some questions are no good fit for German.SE and rather belong on another Stack Exchange site. When I want to flag it accordingly, I only get the option to flag it for migration to German.Meta.SE, but no other sites.

Is this on purpose or related to the achieved reputation? Or is it some sort of bug? 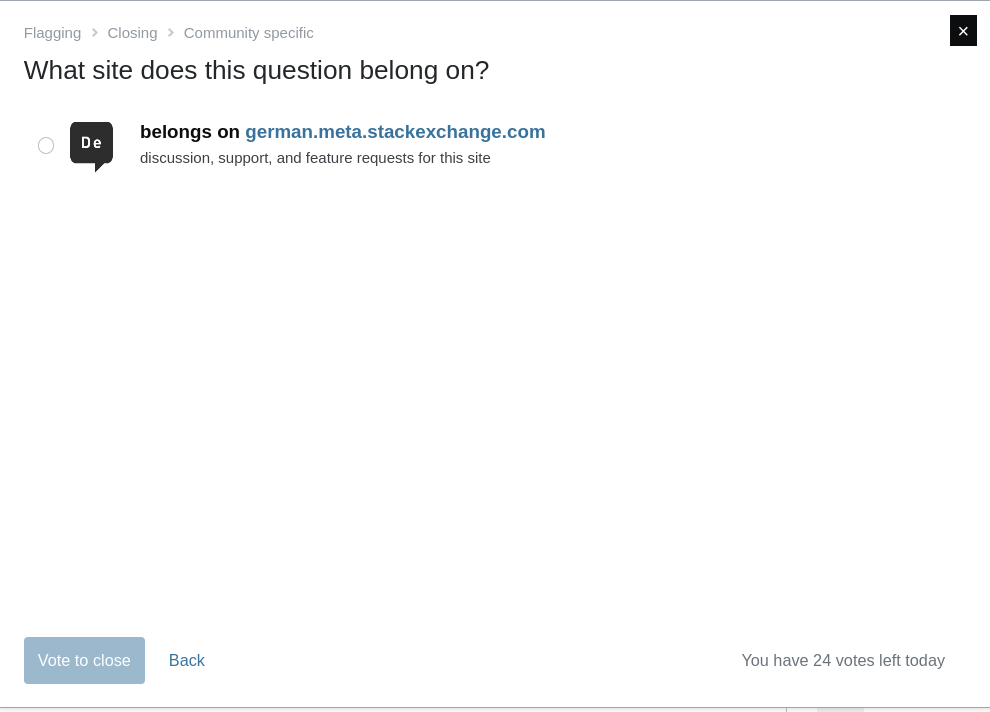 There are so-called migration paths and not all sites have them; one of the footnotes in the FAQ about migration says this:

2 Not every site has selectable migration paths; in particular, beta sites, recently-graduated sites, and Meta Stack Exchange don't have any selectable sites (other than the site's per-site meta, if applicable, and vice versa). On such sites, only moderators can migrate questions out of that site (as they can choose any site to migrate to).

German Language Stack Exchange isn't a beta site anymore, but it's not fully graduated either (e.g. the lack of a custom design, and a privilege reputation scheme that corresponds to beta sites).

Some questions are no good fit for German.SE and rather belong on another .SE site

In that case, you can flag the question for moderator attention, as mentioned in the FAQ linked to above:

If the site isn't in the list of available migration targets, or the question got closed without being migrated, first read the below points and consider if migration is/was really the appropriate action (in many cases, it isn't). If you think so, you can flag the question for moderator attention and request that they migrate it for you. Simply explain in the reason which site you want it to be migrated. (Please specify only one site; don't list all possible sites it could go to.)

Not the answer you're looking for? Browse other questions tagged bug vote-to-close migration .

This site is for discussion about German Language Stack Exchange. You must have an account there to participate.

3
Orange square for reviews shows only and always 3